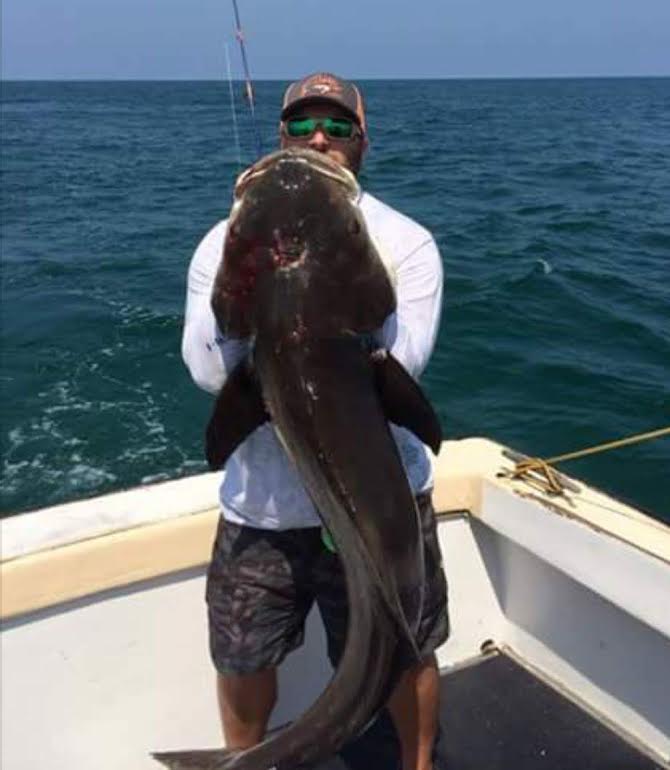 Last March as many along the east coast were preparing for the upcoming 2016 cobia migration into near shore and inshore waters, cobia anglers were at a loss when NMFS announced a June 20th closure date in federal waters. A June 20th closure would have resulted in Virginia and North Eastern North Carolina’s stakeholders from having little to no season.

Within days an informal group of stakeholders that consisted of charter captains (inboard and outboard), Commercial, Recreational, tackle shop owners, marinas, lure manufactures, rod builders, and other stakeholders from both North Carolina and Virginia started a grass roots effort to determine how this closure was possible and start the battle to keep the season open.

The extent of the research that was required seemed endless at times, over 2,500 pages of documents, which consisted of SEADAR 28 (last cobia stock assessment), tagging studies, research papers, federal notices, SAFMC meeting minutes dating back to 2009, and much more. We have also attended dozens of meetings from Cocoa Beach FLA, to ASMFC meetings in Alexandria VA. What we uncovered was nothing short of disturbing.

In 2015 as a result of the passages of Amendment 20b the boundary that split cobia management between the Gulf Council and South Atlantic Council was moved from the Florida Keys to the Florida Georgia border. This resulted in the lowering of the annual catch limit or ACL for the states GA, SC, NC, and VA from 1.4 Million pounds to less than half that amount. In 2017 the Atlantic group’s ACL will be just over 600,000 pounds, while the East Coast of Florida will be over 830,000 pounds.

Justification for the zone split was that genetics and tagging results proved there were two totally different stocks of cobia and that the boundary was at the FLA/GA line. After reviewing the entire SEDAR 28 and researching the studies used or sited in the workshops, it became clear that nether genetics nor tagging results were enough to justify that location and resulting ACL. The final rational came as a result of “fishermen” at the workshop that was conducted in Florida, citing for ease of management the FLA/GA line would be best. The Florida east coast has very interesting management boundaries for kings and Spanish that depending on the time of year move up and down the coast, so they are accustom to zone splits along their coast.

In 2015 North Carolina and Virginia protected their stakeholders and kept their instate waters open, but with the strictest regulations in the history for cobia. In North Carolina Rec boat anglers were only allowed to fish three days a week and keep up to two fish over 37 inches at the fork, while charter captains, due to the timing of the closure already had deposits for that spring’s run, were allowed to fish seven days a week but could only keep four fish per boat. Pier anglers or shore based were able to harvest one fish per day and seven days a week. However, as many who fish for cobia know the fishery is very unpredictable from year to year. In 2016 the weather and fast moving warm water lead to a very short cobia season for most boat anglers in North Carolina.

In Virginia who has had the most conservative regulations of any South Atlantic state to begin with, went from 1 fish per person to 2 fish per boat and only one being able to be over 50 inches total length.

Despite the most restrictive regulations in history for SC, NC, and VA, that included shorter seasons for all states, MRIP estimated the catch for GA, SC, VA, and NC was even higher than in 2015. In one week in July, MRIP claims Virginia anglers harvested over 450,000 fish in one week. Claiming MRIP is best available science I believe is an insult to science itself. Catch totals MRIP is formulating requires over 300 boats targeting cobia every single day for 90-120 days IN ONE STATE.

The National Marine Fisheries Service on January 24, 2017 announced that they will be closing the Recreational Cobia Season for 2017 in Federal Waters.

Here is the information that anglers need to know. The Magnuson Stevens Act (first passed in 1976) established regional fisheries management councils that are supposed to use “best science available” to set quotas for saltwater fish harvests. The Magnuson Act seeks to prevent overfishing and rebuild overfished stocks.

According to the South Atlantic Marine Fisheries Council (SAFMC) using highly questionable MRIP fisheries survey data, the South Atlantic states (Georgia north to New York) almost tripled the annual cobia quota. Many fisheries managers expressed concerns about using MRIP to estimate cobia catches. Commercial harvest data is easy for the fisheries managers to compile because each Commercial Fisherman must report their landing with catch tickets and electronic reporting. Recreational cobia catch is much more difficult to estimate, as very few intercepts of boats with cobia take place. MRIP uses a formula that estimates angler effort, and multiplies it by the average size of the observed fish and a grossly bloated estimate of fishing pressure. In some cases, less than a dozen fish measured will be treated by SAFMC like thousands of fish caught.

Another challenge is the much lower ACL. SAFMC claimed that as a result of “genetic and tagging information indicating that there are two stocks of cobia.” One stock occurs in the Gulf of Mexico and extends through the East Coast of Florida (Gulf of Mexico Stock), and a second stock extended from Georgia through New York.” They used this justification to split the old Atlantic management zone. The east coast of Florida was removed from the South Atlantic zone and moved to the Gulf of Mexico management zone. SAFMC also allocated almost 66% percent of the old Atlantic quota to east Florida, and it is now part of the Gulf quota. The remaining 620,000 pounds are split between the rest of the Atlantic states, even though both Virginia and North Carolina catch have caught more cobia than east Florida in the last five years.

The allocation was also not fair based on historic catch data, as Virginia and North Carolina alone have combined to average catches well over the 620,000 quota. Despite both states cutting their daily creel by half and reducing the number of available fishing days, the catch went up according to the MRIP survey. Fisheries managers and local anglers regard that number as utterly preposterous, especially given how weather eliminates many of the available days where sight fishing (the preferred method of targeting cobia in the Bay)

The zone split itself also raised eyebrows. Magnuson Stevens requires the regional councils to use best science available in order to set management policies. SEDAR28 claimed that cobia are genetically different in the Gulf versus the Atlantic, yet there peer reviewed academic studies published one by Texas A&M that refute SEDAR28 genetic science claims. Tagging results from SCDNR, VIMS, and SMU clearly shows high levels of movement between fish tagged in the Atlantic and recaptured either in the East coast of Florida and Gulf or vice versa.  As result, best science says that the cobia ACL and east Florida should be returned to the South Atlantic as the current management is not managing “offshore” cobia across their entire migratory range.

If the zone split and resulting ACL never happened there would have been no threat of a closure in 2016 even with 2015 catch totals. I also believe any ACL overage in 2016 would be minimal enough that the ACT could be met with minimal creel restrictions in 2017 and not full blown closure or significant creel and effort reductions.

We are asked often “who benefits” from these regulations. It appears based on meetings minute, presentations at SAFMC, studies, and articles citing researchers and managers within SCDNR. That there was an effort to achieve a 50% reduction in harvest dating back to the mid-2000s. The vast majority of the research used in SEDAR28 came from SCDNR, a state by their own admission has been seeing a reduction in their inshore stock abundance and for whatever reason failed to pass management measure within their own state’s waters until 2016.

It should be noted that the primary genetic researched that was used in SEDAR28 came from a study for aquaculture that was conducted in and around the sound of Port Royal SC. Over the course of several years 2001-2009 SCDNR released over 60,000 cobia. In 2007 they released over 30,000 pen breed cobia, some as old as one year old. Per the presentation of SCDNR given at the September SAFMC meeting, over 80% of the cobia harvested in recent years in the locations of released cobia and that were given as samples, have the same genetic markings as those from their released fish. Instead of crediting displacement, as seem in other “stocking” programs, SC DNR concluded that the wild cobia population was at an all-time low

We ask that stakeholders from GA-VA request an emergency interim rule or action to correct the grossly misguided regulations in Amendment 20B. We also ask them to demand from their states to remove joint management from the ASMFC as they have no power or authority to increase ACLs or alter federal zone splits. ASMFC removes the state’s ability to not compliment unjust federal regulations. To think that the states from GA-NY will be limited to seasons that are mere fractions of what the east coast of Florida and Gulf will have (year round fisheries) is unthinkable.